We haven’t put out a bottled product in some time, but I’ve been making new beer at Damgoode Pies in the Rivermarket all spring and summer, three Moody Brews I believe are bottle worthy, but I can’t seem to get the front end in place before the season passes, and the beer styles aren’t appropriate to the season by time it’s bottled. I’m working on that, I promise.

One of those is a lower alcohol beer, a saison I’ve named Aria’s Bier. As previously mentioned, I have a deep and abiding fondness for saisons, or Belgian farmhouse ales. It was one of my first homebrew attempts, culminating in making the first commercially produced saison in Arkansas back in 2012, Vino’s “Saison du Roche.” I still remember that brew, growing up the yeast from a homebrew sized vial, I remember with pride when no one had tried it before, but it passed the “shift beer” test at the Vino’s patio after work. The style continues to intrigue me in how deeply complex yet light and approachable they are compared to other Belgian styles. They aren’t clean or neutral (to our palate) like English ale strains, yet they are light bodied and highly drinkable. Sorry Michelob, but these babies are, in my opinion, the true champagne of beer.

Yesterday, I brewed the fourth batch of Aria’s Bier. While the basic concept remains the same (low hops, orange peel, hibiscus flowers), I have tweaked the recipe for every batch. Despite it’s lower ABV, it’s not a simple beer to produce, mostly thanks to the hibiscus. I first started with a 4.25% abv grain bill, but am finding that somewhere closer to 5% abv base helps support the intense tartness, berry, and citrus flavors of the hibiscus and orange peel. It has become my wife and my go-to after we put Aria down for the night.

The brew day begins as normal, mashing in Pilsner barley with a touch of wheat by hand.

From there, it’s on to the boil, where we begin peeling cases of fresh oranges.

Once boiled, we begin the whirlpool to clarify the wort by spinning, or centrifuging, to separate heavy proteins and hops (called trüb) from the wort. It’s at this step, we steam the orange peels and hibiscus to sanitize them before quickly moving them over to a fermenter where they are cofermented with the beer.

Hibiscus is an atypical beer ingredient, and there’s no set of instructions for using it compared to more traditional ingredients like, say, hops. I’m also finding that not all hibiscus sources are equal in flavor intensity or color. The second or third brew day, using a new hibiscus source, I had to use 4 or 5 times as much the original to impart satisfactory flavor and color.

So every batch of Aria’s Bier has been different. Brewing it has been a real challenge. Some may think that’s a poor recipe design, or isn’t worth fretting over for a lower gravity beer. It would have been much easier to make a now-ubiquitous “session IPA” or something like that, but I wanted to make a session brew that was still intensely flavorful, without using hops. It’s been a tricky beer to consistently make, but I’m really proud of the end result. It’s been a popular offering at Damgoode, and I’ve been pleasantly surprised to see non-craft beer drinkers come in expressly for Aria’s Bier. On a side note, it’s also fun to see the multiple pronunciations of Aria (R-E-uh, for the record).

We are finding it especially refreshing during the dog days of this Arkansas summer. Very light, tart, and citrusy yet bone dry. If you haven’t tried Aria’s Bier yet, I think this is a keeper. 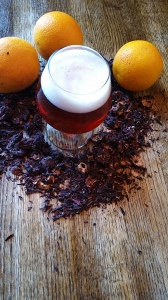